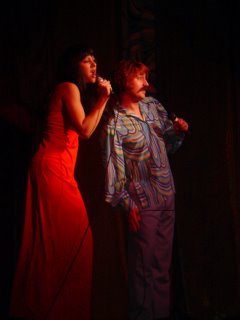 Okay, pictures taken by Lis Fies, from Friday 3/3/06 showing of Dick and Don's Fabulous 60's Rock and Soul Spectacular. I am so stoked that she took these pictures and can't thank her enough!

It was a crazy evening because I had literally one song between dress changes throughout the first act. And frankly my dear, I'm happy I had a body suit on. Otherwise, I would have been naked as a jail bird (yes "jail" bird not "jay" bird) in front of the entire cast back stage. 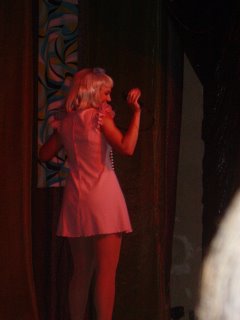 The evening seemed to whip by so quickly that by the time the show was over this Cinderella was ready for pumpkin time. Fortunately, a few of my good friends were there to keep me going till later into the evening. Such a great feeling after a show to know it is done. Then, about an hour later, hope to do it all over again. 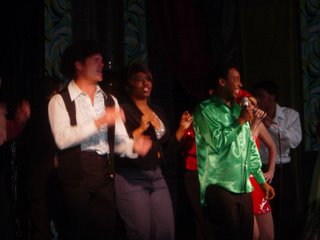 I was wildly impressed with the cast's energy, spunk and tenacity. It was a sheer joy to do Cher once again. Joe Komerinski is such fun to be on stage with. He stepped up an act I didn't think could be topped. Such a crack up. It was hard to keep a straight face and continue Cher's scowling looks. 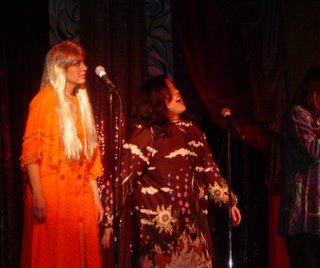 The Mamma's and Papa's was such a trip. Quite literally, I acted as though I was on acid. The entire troop of us, me, Gayla, Rick and Joe looked like we got hit with a really stupid stick.

When I originally was asked to play Michelle Phillips, I had no idea what would become of the Monday Monday act. It truly was a work of art blending four talents on stage, in the moment, creating a boisterous environment.

I was also delighted to see so many familiar faces both from the past shows, friends and family. What a wonderful culmination of warm people which I am thankful for and make my life more enjoyable. Terrah Bennett Smith, the director, continues to revive this show and as long as I'm worth reviving, I'm in. 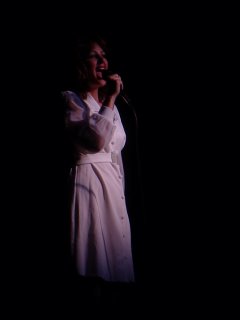